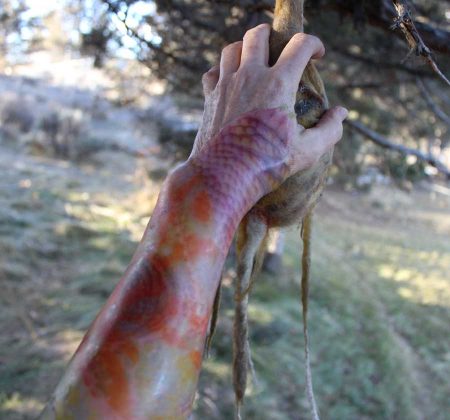 I’ve been working at an artist’s print studio for a couple years now and getting acquainted with all the forms of printing–linoprinting, woodcut, lithography, monoprinting, etching, etc. I have not had much hands on in the studio. Mainly, what I’ve gained has been from observation. But I know that “what goes in” to this weird brain of mine, must at some point “come out.”
If you’ve followed this blog, you will know that for the last couple of years I’ve also been perfecting my recipe for a cheap, homemade substitute for latex–or “homemade alternative to latex“–using tapioca flour and gelatin.
It was inevitable that the two ideas would meet in my brain lounge, marry, and have babies. And so, indeed, they have.
Please meet:

Easy, economical, functional, and fun–as all my other brain babies are. Basically, printable skin is fauxtex poured onto a printed inkjet transparency sheet, allowed to set, then used as another layer of skin over your own skin. Great for costume ideas. But as I’ve been discovering, great also for cosmetic and possibly medical uses.

Before I discuss the “other uses” of printable skin, here is the video tutorial. Mind you, this is a quick prototype:

As you can see from the video, I’ve been experimenting quite a lot with this printable skin. Originally, I thought only to use this as a Halloween costume idea: dragon skin body, steampunk face mask, etc. But I’ve made two more discoveries along the way that I’d like to share. One is that this second layer of skin can be very conditioning to your own skin, and another is that sometimes–depending on the recipe–this second skin is very cold! One of the first things I wanted to test was how long this printable skin would last on my face. I used a recipe with both coconut oil and a bit of vegetable glycerin, and I poured it fairly thickly onto waxed paper. I let it set for a good hour, then put it on my face. The mask stayed on my face a couple hours and I only took it off because I was bored with the experiment.
When the mask was removed, I discovered that my skin felt incredibly baby-like. The pores were clean and smooth, like no other skin conditioner I have ever used.
Because of the coconut oil and vegetable glycerin–both of which are used as skin conditioners–this simple recipe can double as fun mask and cosmetic conditioner.

The other discovery I made is that, with a recipe that used 1 packet of gelatin per cup of water, the resulting “skin” got very cold and stayed cold for at least a day. I wanted to test whether this was just my imagination or real, so I took two glasses of water, allowed them to reach room temperature, then wrapped one glass with a thin layer of printed “skin.” In one hour, the wrapped water glass was five degrees cooler than the unwrapped glass. I left the glasses overnight on the counter, and the following morning, the wrapped glass was still five degrees cooler than the unwrapped glass.
This made me wonder if this “skin” could be used medically. Say, to lower fever or bring relief to a burn victim or someone suffering from heat exhaustion. The ingredients in these recipes are available almost anywhere. And they may be an alternative where no ice is available for relieving heat discomfort. One could possibly also incorporate medicated ointments or essential oils, though this kind of research should be left to professionals. Other than medically, you can experiment with this printable skin by making variations in the amount of gelatin, glycerin, coconut oil and skin thickness (the longer you let the cooked mixture cool, the thicker it will pour). You can also experiment with added technologies such as fiber optics or even computer chips.
The recipe variations I have used are as follows:

Best for costumes: 1 cup water, a splash of milk, two packets of gelatin, 3 or 4 tablespoons of vegetable glycerin, two tablespoons of tapioca flour, one teaspoon of solid coconut oil (optional). After this mixture is poured into a thin sheet, allow it to set for at least 30 minutes before applying it to your skin.

Best for cooling skin: 1 cup water, one packet of gelatin, two tablespoons of tapioca flour, one teaspoon of coconut oil (no glycerin). Once this is poured into a thin sheet, allow it to set an hour before applying.

Lastly, if you are printing a pattern on your second skin, there are different qualities of transparency sheets. The smoother the grit, the better the results. The first transparency sheets I used were almost smooth. The images stayed sticky for a couple hours, but then soaked into the “skin” and dried to the touch.
Then I bought the cheapest inkjet (they have to be inkjet) transparencies I could find, and the image side of the skin stayed sticky for a day. I had to soak up some of the surface tackiness with a paper towel to speed up the drying time.

And that’s what I have to give you so far.

I hope you enjoy this tutorial and come back to give us all feedback on your own experiments.